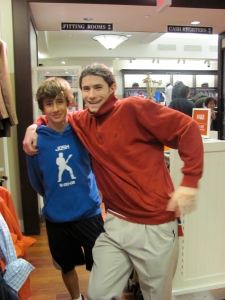 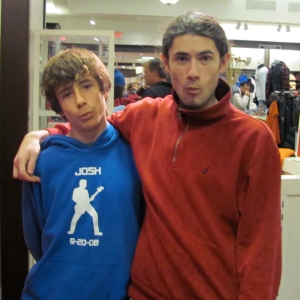 A year ago yesterday, though I didn’t know it, was to be the last time I saw my son alive.
I wrote this post last February and I am posting it again today.

Everyday life seems so normal. Talking, cooking, hugging your children, your husband, getting annoyed with the perennially hungry cat. Chatting on the telephone with your son away at college while doing the washing up, or putting the shopping away; normal everyday things. Until…. until the son is away at college….
Then you find yourself wondering how you could have been so casual about calling your son on the phone, or to the table. You are appalled and grief-stricken for every cross word you’ve ever uttered. You wish you’d never made a fuss about his untidy room.

The last time I saw Andrew was Saturday, October 24th, 2009, nine days before he died.

Andrew and Florentina had come home the night before. It was the last time that the five of us slept and woke up under the same roof. Yet going to bed, waking up in the morning, sitting down for breakfast was nice, and normal.
Saturday we went to look at Minis, then on to Woodbury Common, looking for winter coats for Andrew and Robert. It had been a while since the whole family had gone shopping together. For a while we reminisced about the days when it was the norm for all the children to get in the car for either a post office or supermarket trip, or if one of the children needed the doctor. One thing hadn’t changed though, Florentina and Andrew still argued about who should sit in front, except that they no longer argued as such, it was more a case of who shouted “shotgun” first. Both Robert and I took it for granted that we would sit in the back, he in the middle.

Driving back in the torrential rain from Woodbury Common that Saturday afternoon, I knew that the five of us shopping together these days did not happen often, but I had NO idea that this was the last time that the five of us would ever be in the car together. Yet the time it was nice, and normal.
Woodbury Common had not yielded coats for the boys and on the way home we stopped at Syms where we scored.
“That’s a long line,” said Hugh, looking at all the people waiting to pay. ” It’s over twenty people.”
“Look, why don’t you and the boys go to Games Workshop and get that cable Robert needs. I don’t mind waiting in line.”
“I’ll stay with Mummy and look around the shop a bit longer,” Florentina said.
And off they went. When they pulled back outside, I’d only just paid, while all the time I had been waiting in line, they had gone to Games Workshop and had also bought cakes for tea.
“Wow, what have you got there?” I asked, seeing a bag full of “goodies.”
“Well, you see mummy,” Andrew started to explain in his usual; you see mummy way. “They had a special 4 for $9 deal.”
“And what did you get?”
“We got a chocolate fudge cake, Italian cookies, a pound cake AND,” he said, amusement bubbling in his voice, “A Louisiana coconut cake.”
“No! Not a Louisiana coconut cake?” I said, feigning amazement.
“Yes, a Louisiana coconut cake.”
“And what IS a Louisiana coconut cake?”
“I don’t know,” he said, bursting out laughing. “But it does sound good doesn’t it?” And everybody laughed.
One more hour…..
Hurrying from the car to the door in the pouring rain, I put the kettle on while the others are still filing in. I warm up the kettle with the first boiling water, and boil some more. Fragrant Earl Grey leaves are soon brewing while the Entenmann’s loot is being arranged on the table.
It is 4:45 pm.
We are all sitting around the table, tired from the long day we enjoy our first sip of hot tea and cut into the famous Louisiana coconut cake, when suddenly Andrew announces that:
“I’m hoping to catch the 5:16.”
“But we’ve only just sat down, what’s the rush?” I ask.
“I am having dinner with someone this evening.”
“Who?”
“A girl, Mallory.”
“Can’t you take the 6:16?”
“I want to take a shower and change before I go out to dinner.”
“Oh,” I say. “Take some of these cakes with you.”
“Alright, I’ll take the pound cake,” he says while putting on his new jacket.
“Might as well come with you,” says Florentina, who originally was going to catch a later train.
5:05 pm
“Daddy let’s go, or I’ll miss the train,” Andrew urges. “Bye, Mummy,” he says hurrying out the door.
“What about a hug,” I say, to myself, for he is already out the door and getting in the car.
Oh well, I’ll probably see him in the next week or two.

A couple of days later I called him, dying to find out about his dinner date.
“She bailed out,” he said.
“Oh,” I said, and quickly changed the subject.

We spoke again on Halloween. Several times, actually. He was having trouble finding the black lipstick he needed for his make up as The Crow.
“Mummy, can you get me a pair of leather gloves,” he asked me during another conversation on the same day.
“What size, darling?”
“Large.”
“Did you find the black lipstick?”
“I did, but it is not very good,” he said.

I spoke to him again the following day, Sunday, November 1st.
“I’ve still got black patches around my eyes,” he said.
“They will come off with Baby Johnson’s,” I said.
“I don’t have any Baby Johnson’s.”
We chatted for a while longer and then said good-bye. Another chat on the phone with my son. Nice and normal. Except…. except that that was the very last time I spoke to my son.

As anticipated, I did see my son again less than two weeks from the tea party. It was November 3rd., and to be precise, it was nine days after the tea party.

But I didn’t anticipate seeing him lying on a gurney, at the emergency room of St. Vincent’s hospital; dead!
That was NOT normal and it certainly was NOT nice. The day Andrew died exploded our world and shattered our hearts.

But, now, a year later, though heart broken we are alive and living

11 thoughts on “The Last Time We Saw Andrew Alive”